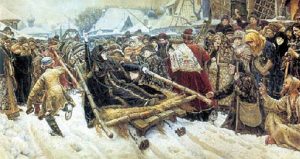 Vasily Ivanovich Surikov is a great Russian historical painter, but all he has to say about him is not enough: the national genius embodied in the art of Surikov. The value of his work is not immediately realized, but only with the passage of life, when a person gains experience, knowledge, develops his mind, develops spiritual wisdom in himself. Comprehension of the art of Surikov is as joyful and difficult as comprehension of Pushkin’s poetry.
Among the paintings of the master “Boyaryn Morozov” is perhaps the most important place. It was shown for the first time at the exhibition in 1887 in St. Petersburg, when Surikov became already a famous artist, the author of “The Morning of the Strelets Execution” and “Menshikov in Berezovo”. Nevertheless, the new work has caused very different responses. Only three people rated the picture positively: writers V. Korolenko, V. Garshin and art critic V. Stasov. Universal recognition came to her, as almost every masterpiece, much later.
When they want to understand a work of art, they solve three questions. Firstly, they determine what the author wanted to say with the picture. Secondly, as he expressed his thought figuratively. The third question: what happened? What is the meaning and significance of the work?
So, we will try to define the Surikov problem in the film “Boyary Morozov”. Let’s see what the plot of the picture?
We turn first to the Russian history of three hundred years ago. Tsar Alexei Mikhailovich under pressure from Patriarch Nikon conducted church reform, which prescribed some changes, including in church rituals. For example, if before people were baptized with two fingers, now it was necessary to be baptized with three. Such innovations have caused discontent among the people, turned into the confrontation of church reform, often reaching fanaticism. There was a split. Those who did not want to submit to the royal decree were called schismatics. Soon they were brutally harassed — sent into exile, thrown into earthen holes or cellars with rats, burned alive. But the schismatics did not give up, among them were people of all segments of the population – from peasants, beggars and artisans to merchants, boyars and princes. Some enjoyed wide popularity and great influence among the people. Just such a splitter was the boyar Morozova, a man of extraordinary spiritual strength. The king ordered to arrest the rebellious boyar, take away her property and land. He offered her freedom and the return of wealth, if she renounced her views, but Morozova was unshakable. Then she was deported from Moscow and soon killed.
Surikov portrayed the heroine when she was taken to the peasant’s wood on the streets of Moscow, either for questioning, or already in exile. And then the question arises. Indeed, by the time the artist painted the picture, church reform, which was so acutely perceived by the people in the seventeenth century, did not concern anyone, including the artist himself. Why did Surikov choose a similar plot? There are many examples in Russian reality when people sacrificed themselves for the sake of the idea that they were the most important national trait of the people. The history of Morozova made it possible to express and glorify this trait, and thus attracted the masters of her tragedy, and not at all the essence of the boyars’ schismatic activity.
Thus, the main task of Surikov considered the embodiment of the idea of ​​self-sacrifice for the sake of belief. He surrounded Morozov with various people — adults and children, men and women, boyars and beggars, wanderers and nuns, merchants and artisans, priests and archers — to show how people feel about Morozova’s feat. The second task was no less ambitious than the first. The combination of two tasks gave rise to the third — to embody the image of the Russian people in a tragic, tense moment of life.
In order to take up the creation of a painting, it was necessary to feel in oneself something akin to those people whom the artist wanted to portray. Surikov came from a Cossack family. His ancestors came to Siberia with Ermak. “In Siberia, the people are different than in Russia,” said the artist, “free, courageous … they say about us:“ Krasnoyars are the heart of Yara ”. Surikov’s ancestors, the former commanders, and the grandfather, the ataman of the Yenisei Cossack regiment, did not tolerate oppression, loved liberty, and often showed an unbridled temper.
This life gave vivid impressions to Surikov. Without a blood connection with the freedom-loving Krasnoyarsk people, without impressions of Siberian life, the artist would hardly have had the desire to write “Morning of the Strelets penalty” first, and then “Boyaryn Morozov”. It turns out that what Surikov wrote about was close to him since childhood. Let us recall his other paintings – “The Conquest of Siberia by Yermak”, “Stepan Razin” …
“But once I saw a crow in the snow. A crow sits on the snow and one wing is set aside, a black spot sits on the snow. So I couldn’t forget this spot for many years. Then boyar Morozov wrote. These words of Surikov are very important. It is impossible to think that the seen crow and the painted picture are so closely related. Only after many years of a crow on white snow, not left from the memory of the artist.