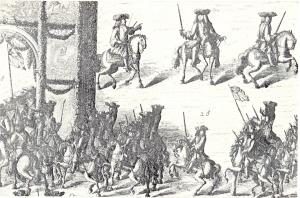 Peter’s engraving is an original and original phenomenon in the history of Russian visual art. Its cognitive value is combined with significant artistic merit, and the traditions of Russian art are organically intertwined in it with the achievements of Western European engraving.
Among the Russian engravers of the XVIII century, the leading role belongs to the master Alexei Fyodorovich Zubov. Many of his works have become masterpieces of the art of Peter the Great, and without them it is impossible to imagine Russian culture of the first quarter of the 18th century, such as “The Wedding of Peter I”, “Vasilyevsky Island”, “Panorama of Petersburg”, “The Battle of Greingam” and many others.
The work of Alexei Zubov is, above all, dear to us, because his best works are consonant with the very essence, the very spirit of the era of Peter the Great’s transformations in Russia. His engravings preserved the first views of St. Petersburg and its environs with slender buildings, palaces and parks, images of the ships of the young Russian fleet full of beauty and solemnity, glorifying his victories in naval battles, the images of Peter I and his famous associates, many very lively sketches of everyday life and mores of time.
The propagandistic and enlightening nature of the engraving on the metal, the attention to it of Peter the Great determined the rapid development and unprecedented flourishing of this type of fine art.
The insatiable curiosity of Peter I led to acquaintance with Western European engraving on metal. In Holland, Peter I appreciated the cultural advantages and possibilities of this type of art. At that time, foreign masters were invited to Russia to work and to train Russians in engraving skills.
Adrian Schönebeck, Peter Pikart, Johann Blikant, Gendrik Devit – these Dutch engravers worked in Russia. The first in Russia school of metal engraving, which included the brothers Alexey and Ivan Zubov, Alexey Rostovtsev, Vasily Tomilov, Peter Bunin and others, is being formed around them, and first of all, by Adrian Shhonebek. In this environment, Alexey Zubov quickly, in comparison with others, becomes an independent master.
Many different works of art from the first quarter of the 18th century have survived. But the study of these works is associated with a number of difficulties. Many of them are poorly preserved. The paintings are faded, the engravings have faded or erased. Many do not have the signature of the masters who made them, and attribution is extremely difficult. It happens that over time the attribution of the same work changes several times.
Currently, we know over a hundred works certainly belonging to Zubov. This is much more than any other engraver of Peter the Great has done. Such an extensive artistic heritage created over forty years of work is a good material for recreating and analyzing the work of the largest Russian engraver. We have significantly less actual material in order to restore the life path of Zubov. Much of his biography remains unclear; we can only make guesses and assumptions about the many events of his life. His name is mentioned in archival papers and notes of the Armory Chamber and the St. Petersburg printing house, in materials of the Academy of Sciences, in church confessional books.
Aleksei Zubov was born in 1682 into the family of a famous icon painter and denominator of the Moscow Armory Chamber.
The father of the engraver, Fyodor Evtikhiev Zubov, came from the Great Ustyug, from a family of hereditary icon painters. In the Verkhospassky Cathedral of the Terem Palace of the Moscow Kremlin there are two remarkable works by F. Zubov, written by him in 1680, the icons “Login Center” and “Fyodor Stratelates”. In terms of the manner of execution, they are very close to the works of Simon Ushakov, only in them there is less “divine svetovidnoy harmony”, as contemporaries said about the works of S. Ushakov, and more than living human passion and emotional excitement.
F. Zubov was not only a talented icon painter, but also a remarkable draftsman and miniaturist of his time. There is no doubt that, starting to teach his sons of icon painting, he tried first of all to transfer to them his mastery of the draftsman. In the department of the Old Russian painting of the State Historical Museum there are stored “passages”, signed: “This is the sample of Fyodor Evtikhiev”. Each penetration is a drawing transferred from icons to paper using soot diluted in garlic juice. Profori Fyodor Evtikhieva is distinguished by her skill in building a composition, confident lines of the pattern, which accurately indicate the shape of the form. It is not accidental that the portraits of Fyodor Evtikhiev for many years and after his death served as models for icon painters.
In 1678, F. Zubov took part in the creation of a handwritten facial gospel, on the pages of which there were one thousand two hundred colored miniatures, a large number of ornamental frames, headpieces, endings and patterned capital letters.
F. Zubov is in the center of Russian artistic life, which in the 1960s – 1980s was concentrated in the Moscow Armory. Numerous artworks made in her workshops at this time show a high level of performance.