“Portrait of D. A. Furmanov” by Sergey Malyutin 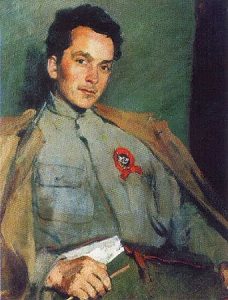 Sergey Vasilyevich Malyutin is the oldest in terms of age and creative experience of all Russian masters who came to Soviet art. With the victory of the October Revolution, which the artist enthusiastically met, new heroes are included in his thematic repertoire.
“Portrait of D. A. Furmanov” is not only one of the most significant works of Malyutin, but also an important milestone in the history of Soviet painting. It was in this work for the first time, with great depth and artistic expressiveness, the typical appearance and character of the person who made the socialist revolution and was formed by it was embodied.
The work on Furmanov’s portrait is an example of a complex, thoughtful quest for an extremely truthful, psychologically capacious image of a contemporary. Unfortunately, neither in the few manuscripts of Malyutin that have come down to us, nor in the abundant diary notes of Furmanov stored in the Moscow archives, we have so far managed to find anything essential concerning this work, which undoubtedly should have left a certain trace in biographies portrait painter and “original”. The more valuable is the short story about her, heard from the artist’s daughter O. S. Malyutina.
“Portrait of Furmanov Sergey Vasilievich wrote in the winter … I remember that it was very cold in the unheated workshop, which caused Furmanov to put on his overcoat. In total, five sessions took place. There had to be another one – the last one. My father wanted to finish his hands and finally walk through the whole portrait. But Furmanov was very busy, and this last session did not take place. Sergey Vasilyevich finished the portrait from memory.
I remember that all the sessions took place in lively conversations, which gave my father great pleasure, since Furmanov was a wonderful conversationalist. Sergey Vasilyevich admired him: “A soft, sensitive soul,” he often repeated in those days.
So, sincerity is what first captured Malyutin in the uncommon nature of the communist writer, the former commissar of the Chapayev Division and the legendary “red landing force”, a man whose courage and dedication gave him the strength of more than thirty years to return to the college bench, learn in the afternoon and to conduct a huge social activity, and in the evenings, and even at night to write. But, of course, it was not only soulfulness that Furmanov saw in the penetrating gaze of the portrait painter. They were guessed and much that due to Furmanov’s exceptional ability to control himself, even his closest friends escaped.
Malyutin’s great merit was that he was able to deeply recognize the complex character depicted in his continuous development and improvement, to guess the features truly dominant in him.
The portrait is dated 1922. This year was special in the life of the writer. In January, the first diary entry about the Chapaev plan appears. Many months have passed in intense creative thoughts. In the fall, the direct writing of the book began. In October-December, Furmanov works on it “at night and in the afternoon.” Chapaev undividedly masters all thoughts of the writer. In the autumn-winter months of 1922, the immortal book was practically created. We have reason to assume that it was during these very days of Dmitriy Andreyevich’s highest creative growth that Malyutin made his portrait.
Furmanov is represented at work – with his constant traveling briefcase, pencil and paper. Looking up from the sheet, he ponders something intently. The appearance of the Malyutinsky hero is very close to the literary description of the writer, which his contemporaries left us. A slim figure, a beautiful, intelligent face with a cap of curly hair, a high forehead, large dark eyes, a lively and penetrating, finely defined mouth. Dressed in a military tunic, with a military order on his chest and wearing an overcoat draped over his shoulders, portrayed revives in us the memories of Furmanov-Commissioner, the hero of the civil war.
Until the end of his days, Furmanov was a writer-fighter, a writer-fighter. And it declares itself in the portrait. But says quietly, restrained. How reserved was the hero himself, who considered that a person shouting about his exploits, even big ones, “… will be considered, perhaps, for a blessing, for smarts, for a talker.” Malyutin deeply and subtly managed to uncover all the hidden springs of complex furman nature, harmoniously combining in itself inflexible will and spiritual warmth, irreconcilability and cordiality, mathematically precise business calculation and almost childlike spontaneity, sober mind and passionate emotionality.
Unforgettable eyes. Their soft, velvety light, emitting an inquisitive thought, as if concentrated all the best properties of the person being portrayed, which make up one universal property – humanity. She is the leader in the portrait of Malyutinsky. Accordingly, the form found by the artist is surprisingly simple, natural, calm. How simple, natural and calm the hero himself was ultimately. A multifaceted approach to nature and its detailed description, typical of Malyutin.