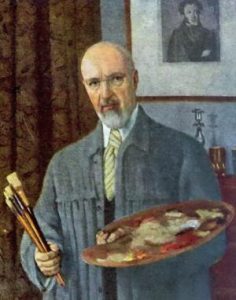 Konstantin Fedorovich Yuon – a representative of the older generation of Soviet painters. His creative activity began in the pre-revolutionary years. And then the name Yuon-artist gained fame.
He belongs to the circle of those masters whose activities were a link between the Soviet artistic culture and Russian advanced pre-revolutionary art. Having absorbed the best traditions of the full-blooded Russian realism of the 19th century, Yuon entered Soviet art as an artist with a wide creative range, giving his people the talent of a painter, theatrical decorator and teacher, the inexhaustible energy of a public figure, his knowledge of an art historian and theorist.
Juon’s life and career is closely connected with Moscow. Here he was born on October 24, 1875. In a large and close-knit family, the Yonovs took a great interest in music; Konstantin Fedorovich’s brothers and sisters studied at the Moscow Conservatory. Music played an important role in the upbringing of the future artist, taught him to understand beauty, poetry, and developed a sense of rhythm. There were many young people in the house, often live paintings were made and children’s performances were staged. The elder brother composed melodies and lyrics to them, Yuon was entrusted to write scenery under the guidance of a family friend, the artist of the Maly Theater K. V. Kandaurov.
Love for the theater was raised by a young man and his mother, Emilia Alekseevna, who made theatrical costumes for masquerades at the Moscow hunting club, where in those years artistic youth gathered.
The Yuonov family lived in one of the oldest parts of Moscow – Lefortovo. This region, associated with the epoch of Peter I, could not but interest the impressionable boy, who read out the novels by I. I. Lazhechnikov, M. N. Zagoskin, A. K. Tolstoy. Yuona soon began to enthrall the monuments of the old Russian architecture, primarily Moscow and the Moscow region: the Kremlin and China Town, the Trinity-Sergius Lavra, Kolomenskoye. Over time, his interest in the history of his native country, in its original way of life and life, the traditions of national life became more and more serious.
After the first visit to the Tretyakov Gallery in the 1880s, a talented young man opened a new world of beauty in the work of great Russian artists: I. E. Repin, V. D. Polenov, V. M. Vasnetsov, I. I. Levitan and others.
Particularly impressed by the art of V. I. Surikov. Yuon was clear and close to the plots of Surikov’s paintings, their original powerful heroes. Surikov taught a lot to the young artist. In this regard, Yuon wrote in Autobiography: “My own love for history and antiquities, for the decorative and eloquent colorful forms of the past centuries in conjunction with living life and in living light – attracted me to him (Surikov.-Ed.). He, more than any other Russian painter, was able to connect history with modernity, to reflect common world ideas in the tragedies and struggle of a living person, to link art with life. ”
While still a student at a real school, Yuon began to seriously study Russian architecture. Therefore, it was quite natural that he enrolled in the Moscow School of Painting, Sculpture and Architecture in the architectural department in 1894. Soon, however, he realized that his main vocation was painting and switched to the painting faculty. Nevertheless, the lessons of ancient architecture played a significant role in the development of its artistic taste and determined mainly the range of themes of his paintings.
The time of Yuon’s entry into the path of the painter coincided with a period of complex ideological and artistic struggle in the Russian art of the late XIX – early XX century. This struggle was the result of a deep crisis of bourgeois culture, which came both in the West and in Russia. Representatives of the reactionary art began an open campaign against realism, fighting for art, freed from all ideology and tendencies, for art that only certain individual “individuals” could understand.
The Moscow School of Painting, Sculpture and Architecture, where Yuon studied in those years, was a stronghold of ideological realism. It was taught by N. A. Kasatkin, K. A. Savitsky, A. E. Arkhipov – artists who continued the traditions of the Wanderers art. With their own creativity, they proved to the students how great the picture has with serious and deep social content. Studying with these masters has undoubtedly determined the progressiveness of views on the art of future artists – students of the school, in particular the views of Yuon.
The closest thing to Yuon was the bright, sunny art of A. E. Arkhipov, the beauty of folk motifs in his paintings, the masterly skill in transmitting the light and air environment. But the most important for Yuon were classes in the workshop of V.A. Serov, where he completed his artistic education at the school. At Serov, young people have always found a solution to any creative question. Serov was a wonderful artist and sensitive teacher. He was able to reveal the creative individuality of each student, to direct him along the path of attentive study of reality, he appreciated the simplicity in expressing the artistic image, loyalty to the traditions of national culture.