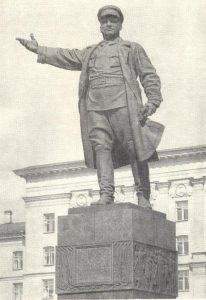 People’s Artist of the USSR Nikolai Vasilyevich Tomsky is one of the outstanding masters of the fine arts of the Soviet era.
Nikolai Vasilyevich Tomsky was born on December 19, 1900 in the family of a rural blacksmith in the village of Ramushevo, Starorussky district, Novgorod province. In 1912 he graduated from the rural four-year school there. Since childhood, Tomsky loved to draw. But where was the peasant boy thinking about art education! Simultaneously with his studies, he helped his father in agriculture and worked with him in the forge. When, during the First World War, his father was taken to the army, he remained in the family the only employee.
The life of Tomsk after the October revolution was different. From the age of nineteen he participated in the civil war, was in the ranks of the Red Army. In battles with the White Poles was wounded. After recovery, Tomsk was left to work at the Starorussky military enlistment office. Here he became close to an amateur creative team, participated in amateur performances, wrote posters and posters with enthusiasm, and also drew many of his friends and comrades with great enthusiasm. The artist V.Svarog drew attention to his drawings, who advised Tomsky to take up art seriously.
This council captured all the thoughts of Tomsky, and when, after demobilization, he was faced with the question of his future life, his choice of profession, he decided to go to Petrograd to study.
In 1923, Tomsky entered the Petrograd Industrial Artistic College (organized on the basis of the former school of the Society for the Encouragement of Arts), where he studied with a prominent sculptor V. V. Lishev.
Formalist teaching methods that were widely used in art schools at that time did not have a place in Professor Lishev’s class – a knowledgeable and experienced teacher, a broad-range artist, firmly standing in the position of realism. Lishev carefully instilled in his students professional skills, the ability to see nature and translate it into sculpture, imparted to his students his rich experience and knowledge, fostered their artistic taste. In accordance with the individual inclinations and talent of each, he directed their development along the right path.
Tomsk’s classes under the guidance of a thoughtful realist teacher gave the most positive results. With great appreciation, Tomsky remembers his teacher, thanks to whom in the four years spent in the technical school, he mastered the basics of professional skill.
Back in the years of study Tomsk joins the creative work. In 1925 he appeared with the first portrait work – the bust “V. I. Lenin in childhood ”, performed professionally competently and received a good assessment of teachers. The bust was exhibited at the exhibition dedicated to the first anniversary of the death of V. I. Lenin, and then was acquired by the State Museum of the Revolution in Leningrad. In his student years, Tomsky tries his hand in monumental plastic, participating in competitions held by the technical school. So, in 1926 he performs a three-figure composition – a project of a monument to V. I. Lenin.
In 1927, after graduating from the technical school, Tomsk was engaged, under the direction of Lishev, in the restoration of monumental and decorative sculpture of Leningrad. This work occupies a significant place in the creative formation of the young sculptor. She enriched him with practical experience, aroused a deep interest in Russian artistic culture. Tomsky seriously studies Russian sculpture of the XVIII — XIX centuries: first of all, the works of F. I. Shubin, M. I. Kozlovsky, F. F. Shchedrin, I. P. Martos, V. I. Demut-Malinovsky, who created remarkable monumental works , decorative and easel plastics. The lessons of Lishev, practical work and the study of the classical heritage armed Tomsk with the knowledge and experience necessary for independent activities.
The themes of modernity, which form the basis of Tomsk’s interests, at this time find their expression in portrait sculpture. In 1928 he created the bust of V. I. Lenin, in 1929 – a sculptural portrait of A. M. Gorky, which received a positive comment from the writer, and the bust of A. V. Lunacharsky, and in 1930 – a portrait of K. Ye. Voroshilov. All these works have received widespread distribution in plaster castings.
In the years of the first five-year plan, in the period of a powerful upswing in the industrialization of the country and the collectivization of agriculture, the new stage in the development of Soviet art was reflected in the works of the progressive movement of socialist construction.
In these years, Tomsk appears for the first time as a mural sculptor.
The first piece made by Tomsk at that time was the monument-bust of Karl Marx, cast in bronze and installed in 1932 in Baburinsky Square in Leningrad.
The collaboration with the famous sculptor V.V. Kozlov, the author of the monument to V.I. Lenin in front of the Smolny in Leningrad, who designed the monument to V.I. Lenin in Sevastopol in 1932, played a major role in the development of the Tomsk-monumentalist.