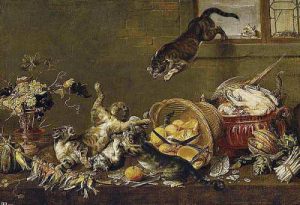 Even those who are poorly versed in art, have heard of Dutch painting. But many people associate Dutch painting only with Rembrandt, sometimes Vermeer and Van Gogh, who was Dutch only by descent.
And Dutch painting is a bright and original page in world art, worthy of special mention. Especially when it comes to the Golden Age of Dutch painting. Bright artists began to appear in the Netherlands in the seventeenth century. These painters are known under the common name “Little Dutch”, which in no way reflects their talent, but is associated exclusively with the choice of themes for creativity. “Little Dutch” often appealed to secular realism, depicting the world and people.
The golden age of Dutch painting is conventionally divided into several periods. The first of them (from about 1620 to 1630) is associated with the statement in painting of realism. The second period (from 1640 to 1660) was caused by the flourishing of the local art school. In the third period (from 1670 to 1700) the decline of the Dutch school occurred, primarily due to economic reasons. It should be noted that in each period there was a cultural center, so the first period is associated with Haarlem, where Khalsa worked at that time. Then the center of painting moved to Amsterdam, the place of work of Rembrandt and Vermeer. The most important discovery of the Golden Age of Dutch painting can be considered a household genre. It was the Flemings who first began to depict scenes from the life of ordinary people: citizens, peasants and burghers. The pioneers of this genre are considered to be Ostade and his students Bega, Oudenrogge and Dusart. Each picture of the authors is distinguished by a dynamic and even brutal character, for example, on one cloth depicts a pub fight. The influence of Rembrandt’s creative manner led to the massive use of soft golden light and shade.
Urban scenes are often found in the paintings of such Dutch people as Leicester, Hals, Codda, and Molenar. In the second half of the 17th century, artists loved to depict doctors, scientists at work, their workshops, household chores at home or social events. For some masters, a certain tendency toward the romanticization of everyday life is characteristic, for example, Terborch, Metsu or de Hoch. Pictures of the later representatives of the genre, Van der Werf and Van der Nera, differ in their desire for an elegant image, which often leads to the pretentiousness of the plot. The golden age of Dutch painting is also famous for its landscapes. As an independent genre, landscape appeared in the works of Harlem artists: van Goyen, van Reisdal and de Molain. Their works have a common feature – they depict rural corners in the original silver light, and the material unity of nature is brought to the fore. Seascapes or marinas deserve special mention. Among the Dutch painters of the golden age, marine painters were de Vliger, Porcellis and van de Capelle. Their creativity is characterized not only by the image of certain sea scenes, but also by working on techniques for drawing water, playing light on it and the sky.
In the second half of the 17th century, philosophical overtones began to penetrate the Dutch landscape. This is especially noticeable in the works of Jan van Rijsdal, in whose landscapes drama, dynamics and monumentality appear. His tradition was continued by Hobbe, who added sunlight to the landscapes. For paintings Konink characteristic panoramic, and on the canvases van der Nera almost always depicts the night landscape, including the transfer of moonlight. Sometimes landscapes were supplemented with images of animals, for example, horses, grazing cows and sheep, hunting scenes. Toward the end of the Golden Age of Dutch painting, Dutch artists began to get involved in foreign landscapes, in particular the nature of Italy, such as van Lar, Bot, Venix and Hackert. The founder of the cityscape genre was the Sanredam and his followers the brothers Berkhide and Jan van der Heyden. Another characteristic genre of the Golden Age of Dutch painting was interior painting, including scenes with home, church and palace rooms. For the first time, interiors appeared in the paintings of the second half of the 17th century among the artists of the Delft guild: Haukgest and de Witte, who was the main representative of interior painting. De Witte eagerly used Vermeer techniques, depicting scenes full of sunlight. Undoubtedly, the main genre of Dutch painting of the 17th century was still life, in particular the image of breakfast. The pioneers of the still life are considered to be masters of the Harlem guild of artists Klas and Kheda. Representatives of the Utrecht school preferred lush flower still lifes, and the artists of The Hague succeeded in depicting fish and sea creatures. In Rotterdam, democratic kitchen still lifes were popular, but Leyden artists created vanitas – philosophical still life, which with the help of various symbols reminded of the transience of time.