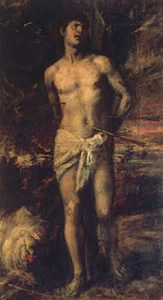 The painting “Saint Sebastian” by Titian is considered to be the pearl of the State Hermitage. Why does this work affect viewers so much? Who is depicted on it?
In the early Middle Ages, a legend arose about the native of the Roman city of Narbonne, Sebastian. Having been educated in Milan, he went in search of happiness to Rome. Thanks to his courage and honesty, the young man attracted the attention of the Roman emperor Diocletian. Deserving his favor, Sebastian received an appointment to the honorary position of chief of the first cohort of the Imperial Guard, but did not justify the confidence. For his hidden commitment to Christians, he was twice sentenced to death. END_OF_DOCUMENT_TOKEN_TO_BE_REPLACED

Thomas Gainsborough was ten years older than Rokotov. He was born in 1727 in the charming corner of East Anglia, Sudbury in Suffolk. Tom was the ninth child in the family of a cloth merchant, the genus of which belonged to the native inhabitants of the town. From her mother, who wrote flowers pretty well, Tom inherited a talent for drawing. During his school years, the boy ran into the picturesque surroundings of the town to capture the magnificent green of the meadows, the quiet bend of the river, the lonely trees. It is noteworthy that Gainsborough himself considered himself a landscape painter. At thirteen, he moved to London, where he first found himself in a silversmith’s workshop. Here the teenager became interested in modeling. END_OF_DOCUMENT_TOKEN_TO_BE_REPLACED

ROKOTOV - GEYNSBORO: "THE POETS OF THE HUMAN FACE"Thomas Gainsborough was ten years older than Rokotov. He was born in 1727 in the charming corner of East Anglia, Sudbury in Suffolk. Tom was the ninth child in the…